Well it’s been a LONG time since I’ve posted. I’ve been working evenings on the Balboa 24, trying to get most of the fiberglass/epoxy work done before it gets too cold this fall, since I don’t have a heated space. Namely, I’ve been working on completing the deck repair/re-core that I started a LONG time ago. The good thing is that the boat has been in the barn the entire time, so it’s REALLY dry  🙂

Here is when I made the first cuts into the skin of the deck. Scary! 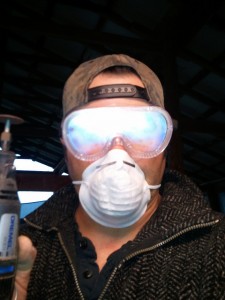 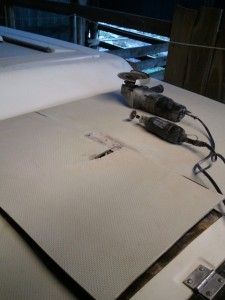 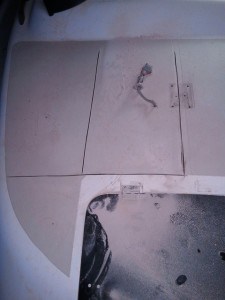 And here is what I found underneath: 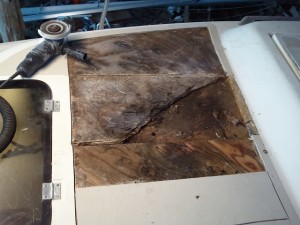 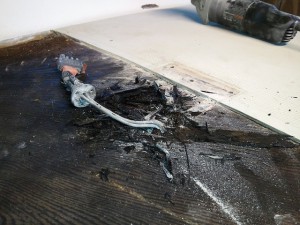 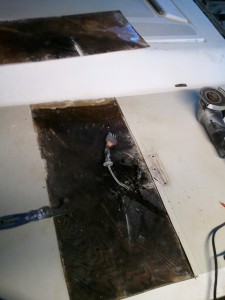 Well time went by, and eventually I cut, scraped, chiseled, and cussed all the old rotten wood out, and let the whole area dry – for like 2 years!  During which time I’ve gotten married bought a house in Florida (we close in a week), helped organize a family reunion, among other things…  🙂

Finally in the last month or so, I got back to work on it. I started by sanding down the underside of the skins, and also the whole area under where the new core would go – then I sealed that area with epoxy before bonding and screwing (I removed the screws and filled the holes the next day) the skins back in place: 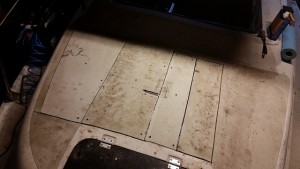 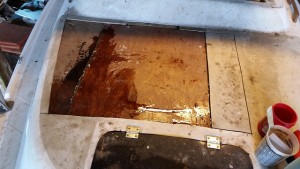 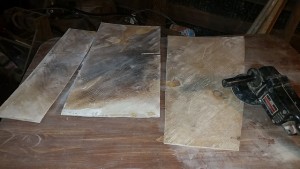 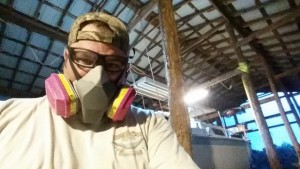 I then ground a bevel (no, it’s probably not 12:1 but it’s strong!) around all the edges, and laid up 3-layer strips of cloth and epoxy all the way around each piece. 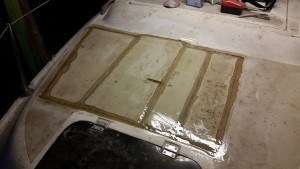 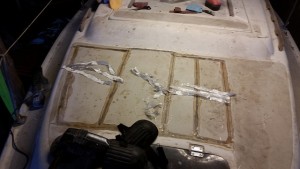 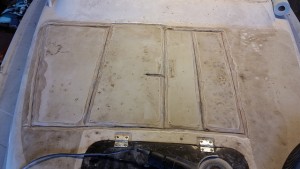 That’s the last of the pictures I have so far, but I have since been fairing and sanding – although it doesn’t look much different. I’m not going to gelcoat or paint the area. Instead I’m going to cover it with Treadmaster anti-slip deck covering, in a light grey. I’ll cut it to match the existing shape of the non-skid area, and it should look pretty good.

I’ve taken a break from the deck now, and am doing some general cleaning of the boat, inside and out – for a change of pace and also to get ready for re-bedding and replacing some of the deck hardware. I probably won’t resume any serious work till I get back from my florida trip in mid-october. Stay Tuned!